It's a long time since the last instalment of our occasional series on fabric and fashions of the 20th century. We're up to the 1930s – the beginning of clothes which, to me at any rate, feel similar to the ones we wear now, especially with vintage fashions being so popular at the moment.

'Smart' clothes still tended to be plain colours, with an emphasis on glamour, especially for evening wear.  Fashion was greatly influenced by the glamour of Hollywood and its beautiful actresses bedecked in silks and satins.   Everyday clothes, though, especially cottons, were much more likely to feature a print.

Compared with the straight, androgynous look of the 1920s, 1930s fashions were much more feminine-looking, with waists emphasised, skirts at mid-calf and pretty hats much in evidence. A smart outfit might include matching bag, shoes and gloves, with the gloves often being a gauntlet style.  Women never went out without a hat, and gloves were essential, too, if you were 'dressed up'.

Suits were much in evidence during the day, for slightly more formal occasions. 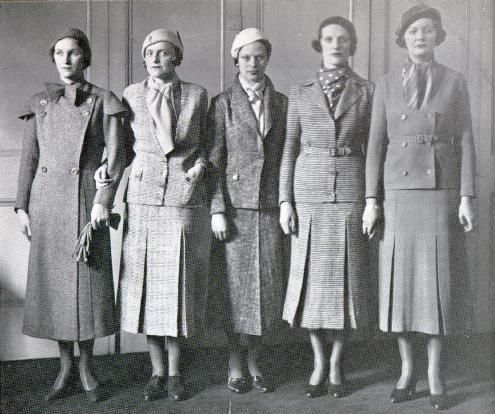 Surprisingly (to me, at any rate!) trousers (high-waisted and wide-legged) were popular amongst the 'trendy', as were fox fur stoles.

(from 1930s/1940s Women's Fashion, dailydoseofstuf.tumblr.com and Who What Wear UK)

For working class women, the styles echoed the fashions of the wealthy, but in simpler, less glamorous (and less expensive!) fabrics. Most housewives wore a 'pinny' over their clothes whilst doing the housework. These were often full length, even wrap-around, handmade and in flowery prints.  They might also feature embroidery, if the seamstress enjoyed doing that.

Home dress-making was very popular - hence all those vintage Singer sewing machines you might be lucky to find at vastly inflated prices.  (My mum had a Singer treadle sewing machine which she threw away in the early 1970s.  She wanted an electric machine, but it wasn't as nice to look at as the Singer, and I think she always regretted getting rid of her trusty old machine, which she'd been using since the late 30s.) 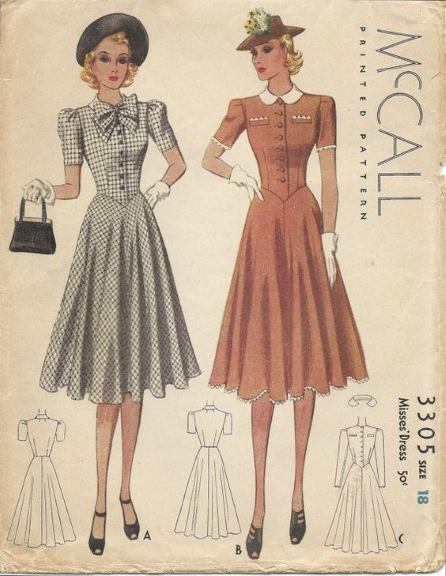 There are more 1930s fashions (and those from earlier in the century) on my Pinterest board Fashions in the 20th Century.