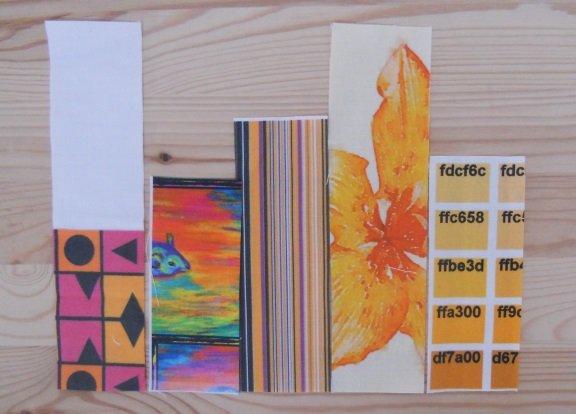 My first block was pinks; the second will be oranges and yellows.  These two will be next to each other in my finished quilt.  The last patch in my pink block is pink and orange (first on the left above), so it leads into patches which are more orange.  The next piece steps up about the right amount, so I think that will be a good first patch in my second block.  Now I have to find some yellow patches, to move away from the orange at the right-hand side of the block.

Then, it’s follow the instructions as before:  join a strip of white to each orange strip, join the strips together (in the right order!), pressing as you go.  Press the seams for the second row of blocks in the opposite direction to the first row, and the same with the third row.  For full instructions, see last week’s blog,  Make a Quilt – The First Block.

Then you can go on to the rest of your blocks.  The next block will be below the pink block, so the height and colour of the first patch are less critical.  You might want to keep an eye on the patch above, so you don’t have too much white close together.  If it doesn’t bother you, of course, then it’s fine.

If you’re making your quilt the same size as mine, then you need five more blocks.  My six will be; pinks, oranges and yellows, greens, greeny blues and blue, blue and indigo, violet.  (Probably!  I haven’t finished them yet, so it may change!)

I meant to include the Rules of Quilting last week, but forgot, so here they are now: 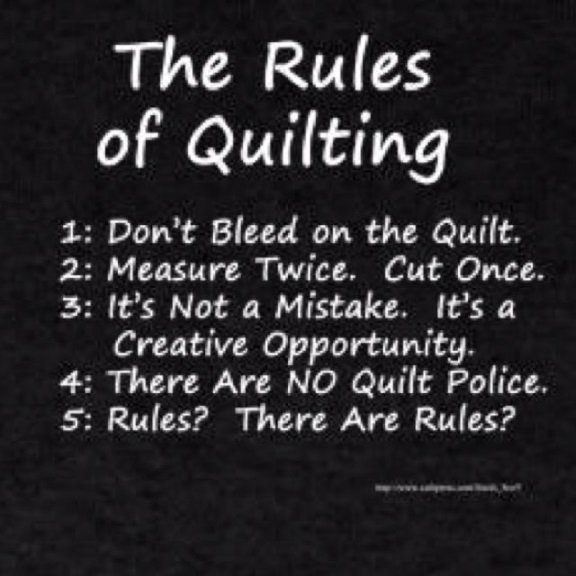 I found these on Sew Unique Creations' web site and thought you ought to see them - especially the last one!

Next Thursday, we'll be showing you the entries to our design competition, so you have two weeks to complete your blocks!  We'll move on to the next stage on February 19th.