Despite living through this decade - or perhaps because of it! -  I've found it quite hard to pinpoint the main popular features.  It may also be because a trend which started in the 1960s has continued - fashion is aimed at the young.  Although everyone adopted many of the trends in some form or another, the extremes, particularly in skirt lengths, tended only to be adopted by the young.  So some items of clothing from the 1970s could happily be worn today, with little or no alteration. 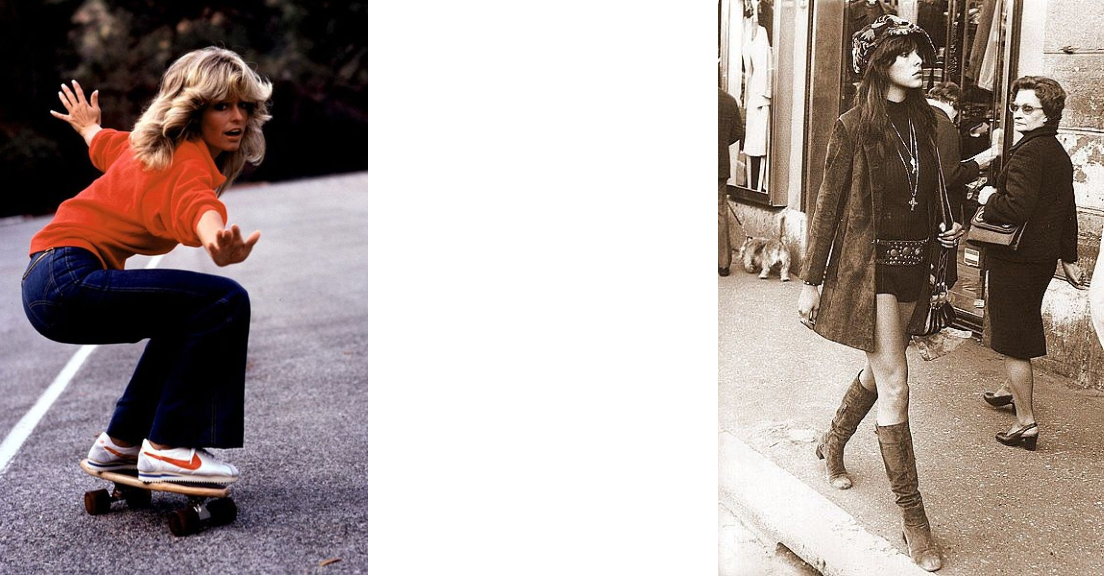 In fashion terms, the 1970s began as an extension of the 1960s - short skirts, close-fitting tops ('skinny-rib' jumpers were popular, maybe with a laced opening instead of a placket), shift dresses with high waists or no waist at all.  Man-made fibres were still being used in many items of clothing, either made to look like natural fibres (e.g.polycotton) or quite obviously not a natural fabric, e.g. 'wet-look' plastics .  Prints were still very popular, but the psychedelic colours began to be toned down - flower prints were smaller and less garish.  Brown and orange were the popular colours of the 1970s. 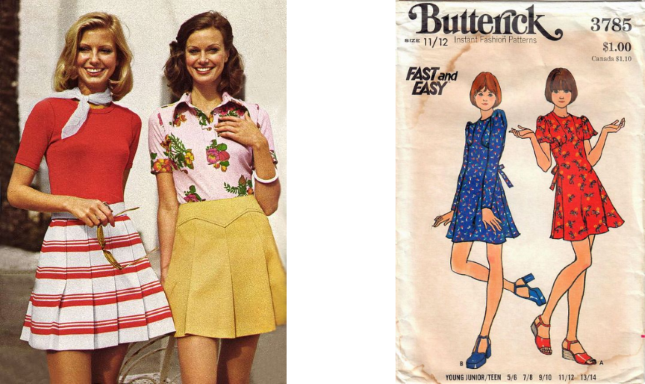 Although the decade began with microscopic minis, hemlines gradually dropped till they were well below the knee by the end of the decade.  'Midis' (mid-calf length) were a popular alternative in the early 1970s, followed by  'Maxis' -  full-length skirts.  At first these were mainly worn in the evening, for parties.  Unlike the evening dresses of previous decades, though, these were not at all formal.   Long (poly)cotton frocks  in pretty prints often had  high waists, round necks and often incorporated elements of a 'Bohemian' style.  (Some of us even wore pretty night-dresses as evening wear!)

Trousers for women became much more common.  Previously, they were mainly worn as a practical item of clothing, but were now frequently chosen as a fashion item.  Trousers were flared and often came as a trouser suit.  Interestingly, most of the trouser suits I've seen on Pinterest are trousers and a jacket, whereas my memory of 1970s trouser suits were trousers with more of a dress or tunic, usually mid-thigh length.

They were mostly a little more tasteful than these! (from PlaidStallions.com)

Hot pants were also popular amongst the young.  Hot pants, as opposed to shorts, were usually worn with smart accessories, including tights and, often, knee high boots.  Knee high boots were also  worn with skirts.  Platform shoes were popular for a short time in the early 70s.

Large pointed collars were popular amongst both men and women, along with 'kipper' ties for men.  An interesting everyday trend amongst women was wearing a short-sleeved jumper (or a pinafore dress with or without sleeves) over a full-sleeved blouse. 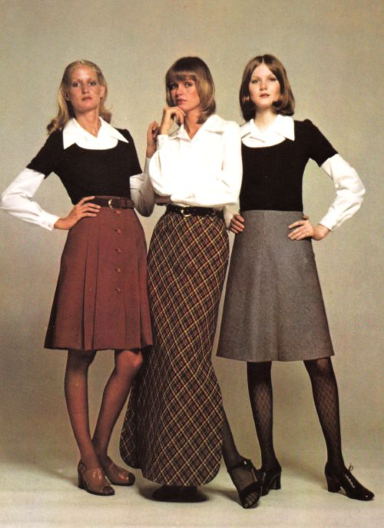 From The Giki Tiki

Floral tops and skirts  -  From The Australian Women's Weekly, 23 October 1974