A Stitch in Time

Did you watch A Stitch in Time on BBC4 earlier in the year?  If so, you will know what a great programme it was - a mixture of art, fashion history, sewing, techniques and detective work!

Each week, a painting was selected and one of the costumes was made, using fabrics and methods as close to the original as possible.  The garments were made by Ninya Mikhaila (The Tudor Tailor) and her team, to fit presenter and fashion historian Amber Butchart, who modelled them for us at the end of the programme - usually looking stunning in them!

I was fortunate to be able to go to Ham House in Surrey to see the costumes displayed, alongside copies of the paintings.  (The Charles II painting actually hangs at Ham House, and the costume was displayed beneath it.)

I really enjoyed being able to see the costumes up close, although it would have been even better if I could have seen the insides, too!  In one or two cases, some of the inside was on show, so you could see a little better how the garment had been constructed or lined. 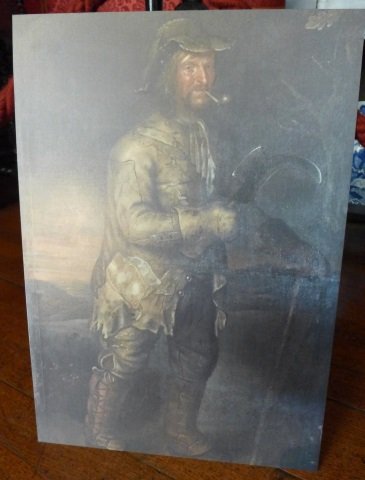 In some respects, this was the most intriguing portrait.  It's very unusual to have a painting of a workman.  Portraiture was too expensive for a working man at this time, so usually, portraits were of the wealthy.

Then, when you look at the clothing, it doesn't look like a workman's clothes.  The conclusion was that the costume would have been made for someone wealthy, probably 50 years or so before the portrait was painted, then handed down, quite possibly several times, until the workman acquired it.  It was made of leather, which demanded some sewing techniques not normally required when sewing woven fabric, and lined with linen. 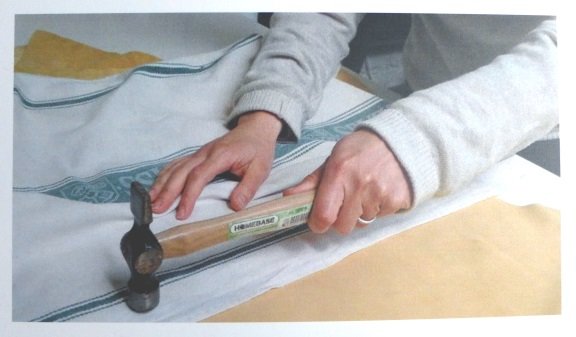 The jacket includes fashionable details, such as the 'mariner's cuff' 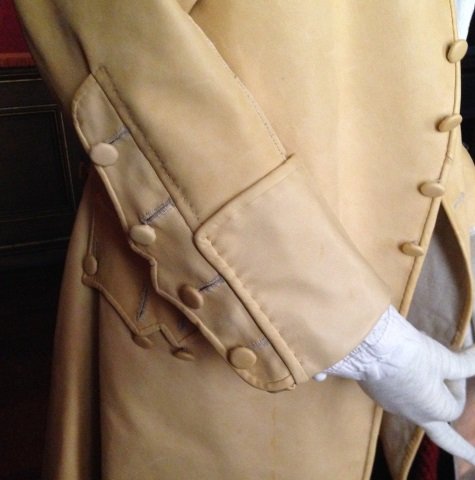 It's a shame I don't have photos of Amber in the costumes - they looked much better on her than on the mannequins! But here is the Hedge-Cutter's outfit as it might have looked when it was new: 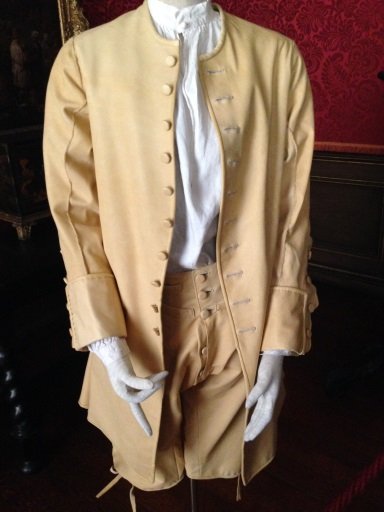 This was the oldest garment made on A Stitch in Time.  The original jupon (a sleeveless padded garment , made for protection in battle) hung above the Prince's tomb at Canterbury Cathedral until WWII; his effigy shows him  wearing the jupon.

The jupon is made of velvet, quilted and stuffed with cotton fibre.  The bright colours and embroidery were the way people could identify their leaders on the battle field.  The embroidery on the reconstruction took 900 hours to complete by hand.   They estimated that it would have taken one person 10 days to complete the original embroidery.  The jupon would have cost about £20, the equivalent of an officer's annual salary. 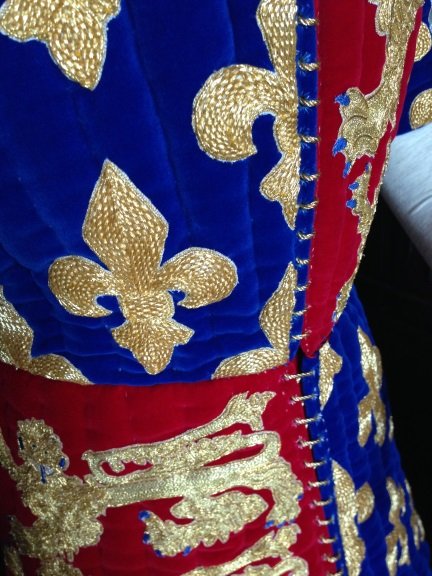 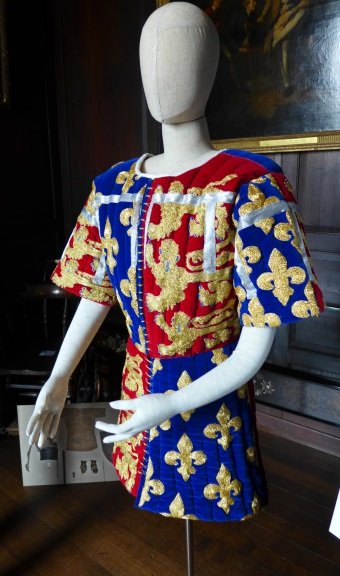 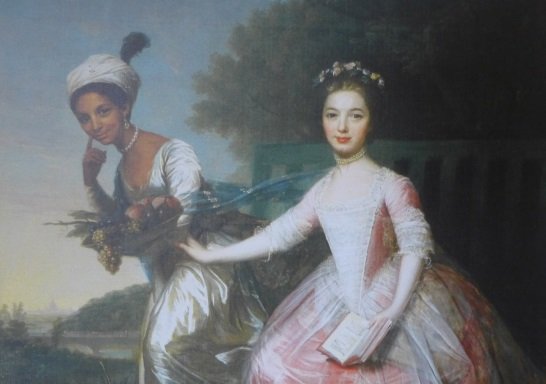 This garment is probably my least favourite, partly because I think it was the least successful.  During the programme, there was quite a bit of discussion about the difficulties in deciding how it was constructed, because the flowers Dido is holding cover most of the bodice. 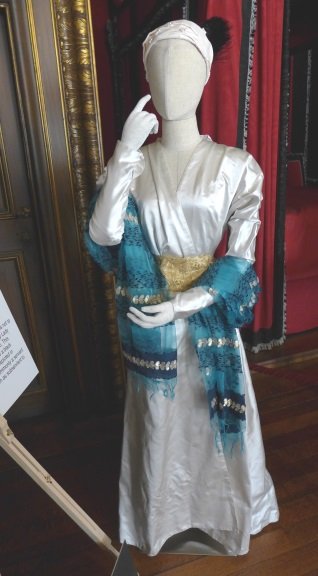 The fabric in the painting quite obviously has a sheen, so the dress is made from satin.  I seem to remember that the headdress caused a few headaches for the makers, too, trying to work out how it was put together.

Underneath the dress are stays made of linen canvas covered with fine wool and bound with kid leather. 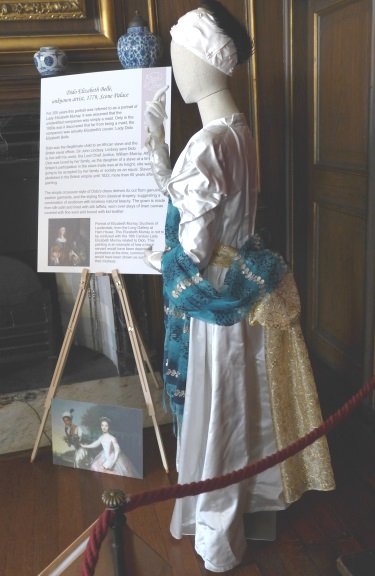 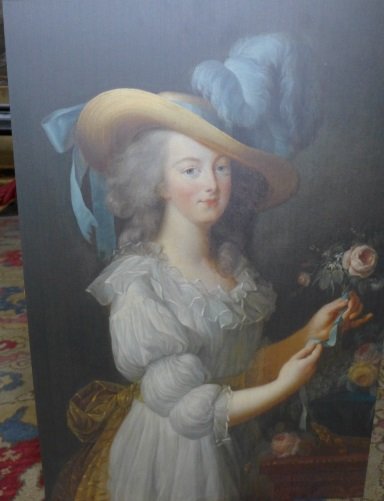 During the time of Marie Antoinette, court dress was very formal and heavily structured.  So it caused quite a sensation when this portrait  of Marie Antoinette wearing a Chemise à la Reine was seen by the public.  They were shocked to think of their queen being painted in her underwear! 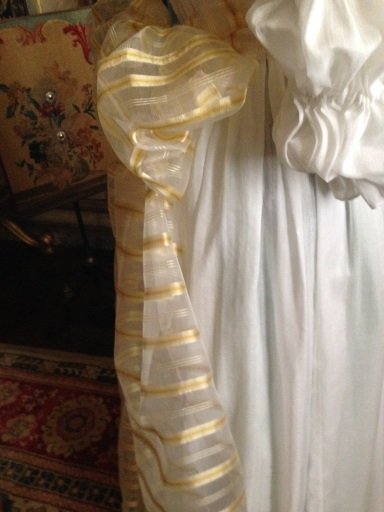 The dress is made of cotton muslin and would have been worn over stays and a petticoat.  These were often pink or pale blue so that the colour could be seen through the muslin.  (See above.) The stays are made from linen canvas covered in silk damask, edged with kid leather and lightly boned. 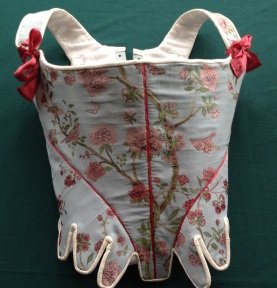 There is a lot of fabric in both the skirt and the sleeves, so lots of gathering to put the dress together! 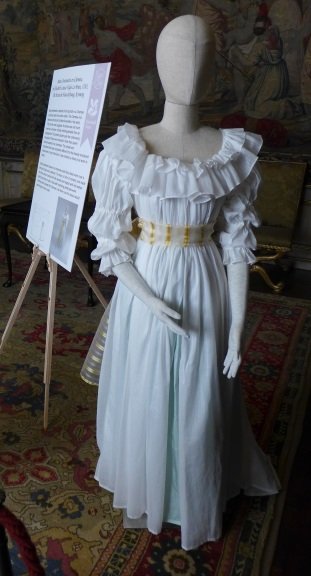 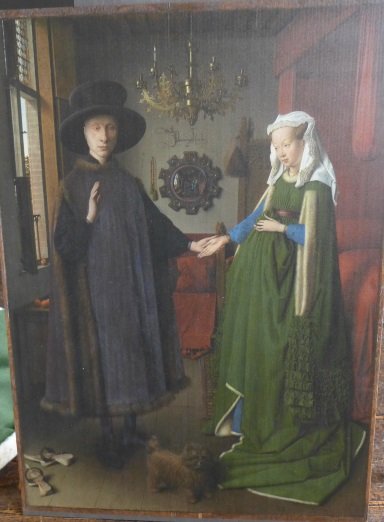 This is a portrait of a wealthy merchant couple from Bruges, members of an Italian family who traded in luxurious fabrics.  It used to be thought that the woman was pregnant, but it is now thought that she is holding up the heavy folds of expensive fabric as a display of wealth.  She wouldn't be doing any manual work wearing a dress like that!

The dress is made from broadcloth, an expensive fabric made even more so for this dress as it is dyed a dark green; the darker the colour, the more often it had to be dyed and therefore the more expensive it would be.  For the programme, the fabric was dyed as it would have been at the time - by hand using natural dyes. 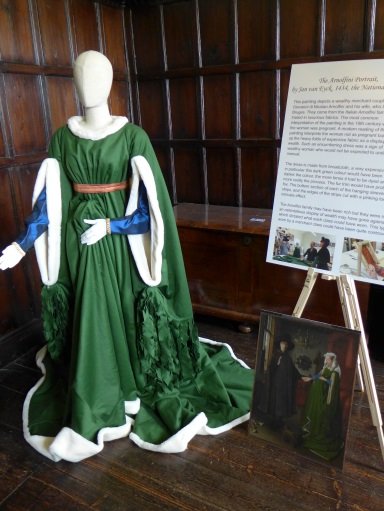 And then there is all the fur trim, which may even have been a lining.  According to the programme, it was most likely arctic fox.  However, one of the interesting aspects of seeing this exhibition was talking to the other people there.  We were all sewing enthusiasts, many of us keen viewers of the programme, so there was a lot of chat about all sorts of things related to the garments.  Whilst I was looking at this dress, two ladies came in who claimed to be disappointed with the costumes, saying that there were all sorts of mistakes.  They thought the trim was more likely to be miniver.  So, arctic fox or miniver?  Discuss.

The bottom section of each sleeve has been cut into strips and pinked to add a decorative effect and another display of wealth. 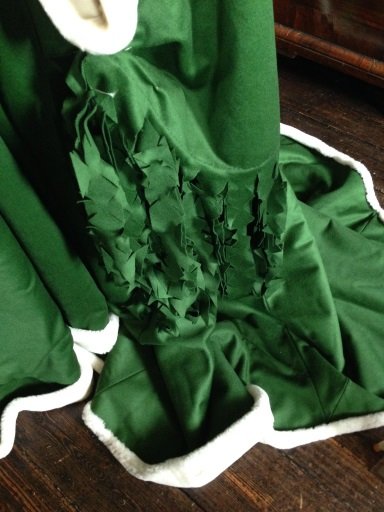 Altogether, this costume was probably far beyond what was allowed for a merchant at that time, when the clothes different classes of people could wear was strictly defined. 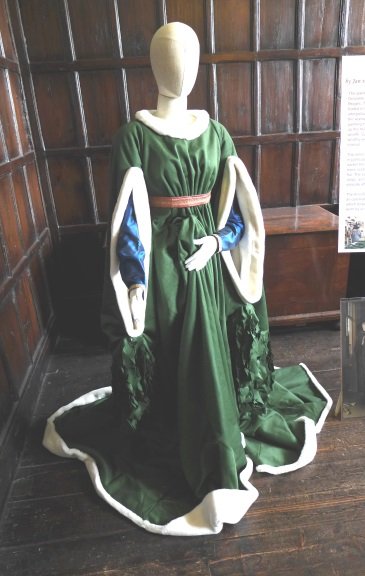 When Amber modelled this costume at the end of the programme, she said that the weight of the fabric made her stand much like the lady in the portrait. 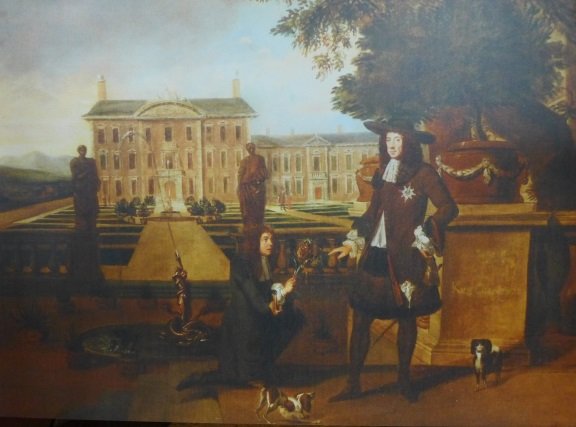 Last but not least, I think my favourite of the costumes -  that worn by Charles II in a portrait which hangs at Ham House.  The owners of the house at this time were firm supporters of Charles II and played a pivotal part in his return from exile.

The coat and breeches, though more informal than the clothing worn by previous monarchs, are still made from rich materials.  Like the green dress above, Charles's 'suit' is made from broadcloth, a luxury woollen cloth, which went through a time-consuming (and therefore expensive) finishing process to create a velvety sheen and beautiful drape.  It was hard not to feel the fabric!  (After all, one of the joys of fabric is feeling it run through your fingers!)

The suit has 110 buttonholes and handmade silk buttons.  These alone are more than a day's work for one tailor. 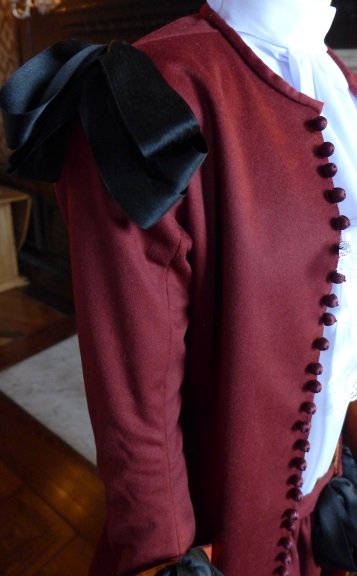 The coat is lined with orange satin, which shows at the cuffs, which are also decorated with bows of black silk satin ribbon, as are the shoulders.  The bottom of the breeches are adorned with loops of the ribbon. 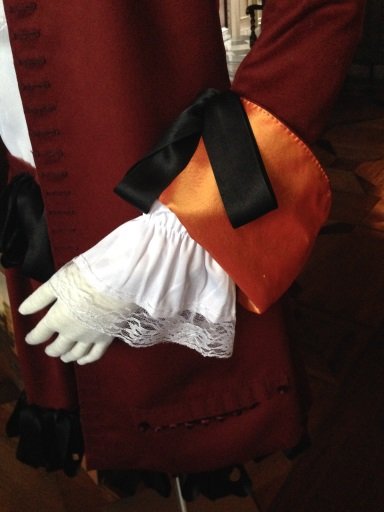 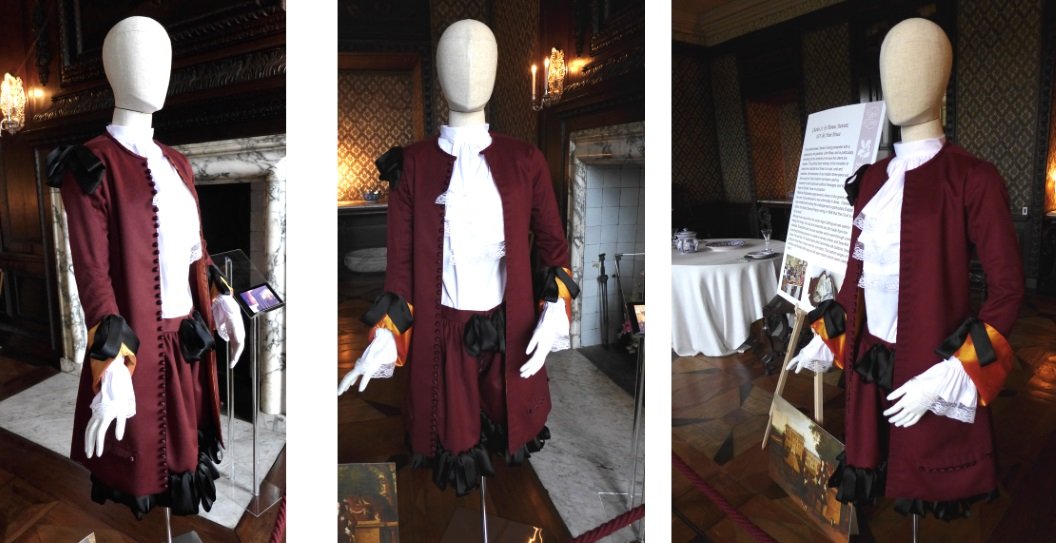