Three ways to make your own pattern weights Do you use pattern weights?  I must confess that I hadn't heard of them till recently. (If you, also, don't know what they are, they're little weights for holding your pattern down whilst you cut out your fabric, instead of using pins.).  I was definitely a pins and scissors girl, although a dress with lots of pattern pieces to pin and using pdf patterns both tried my patience.

I had just started to think I should look into getting some, when I found not one, but three, tutorials for making your own on Pinterest.  I believe some people use kitchen knives (!), baked bean tins, even bananas as weights. In fact, anything heavy, but not too big. You can buy weights, but they're expensive and you can make much nicer ones in a few minutes, using scraps of fabric.

I couldn't decide which ones I liked best, so I decided to make one of each and try them out.  I started with the square one. 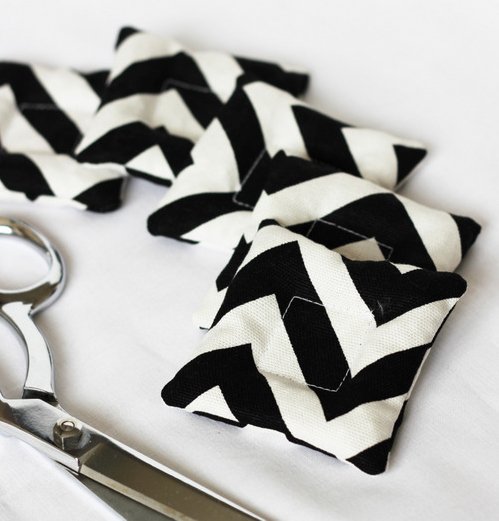 Amy of Positively Splendid suggests using ball bearings – small but very heavy. Unfortunately, they're also expensive and hard to get hold of.  I thought of various other possibilities; in the end I used some old glass beads I had. Glass nuggets used in flower arrangements might also do the trick.

My next weight was the triangular one.

This was my favourite from the pictures; I thought the point at the top would be handy for picking the weight up. However, this was much smaller than I'd realised. You could make it bigger by rescaling the pattern, or just using the pattern as one side of the triangle and cutting it out of 4 different fabrics. One or two smaller weights are useful for smaller pattern pieces. Sachiko of Tea Rose Home suggested filling the triangle with rice.  I was a bit dubious about this, and it is a bit on the light side.  On the other hand, rice is cheap and easily available.

My third weight was the ribbon-wrapped washers. 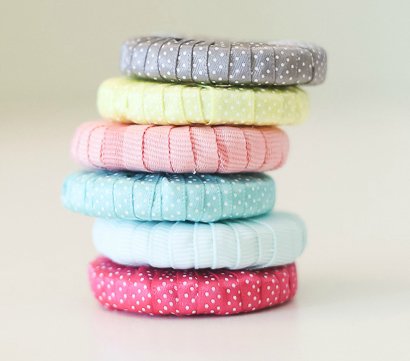 I was going to use bias binding made from scrap fabric instead of ribbon, but I could only get washers with a small hole in the centre. After a bit of thought, I decided to put the washers (I used three) inside a yo-yo.(More scrap fabric used!) I used a hot glue gun to fix a button over the stitches at the top, making a little handle.

After only about half an hour's work, (plus thinking, shopping and finding time), I had three pretty pattern weights ready to use.

Have you made your own weights? I'd love to see how you made them.  You can use them when you're dress-making (eg the Miette skirt) or sewing for dolls.